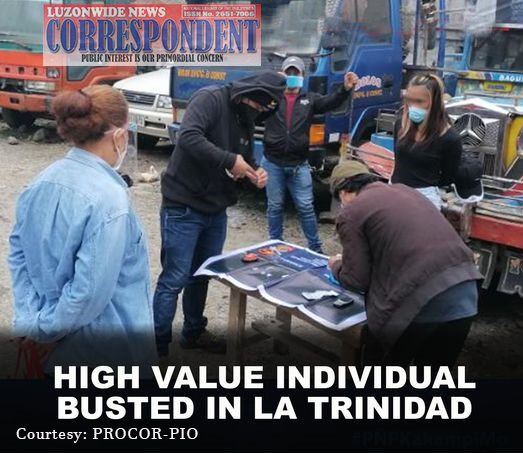 The continuing war of PROCOR cops against illegal drugs resulted in the arrest of a high value individual (HVI) in a buy bust operation conducted at Buyagan, La Trinidad, Benguet on September 20, 2021.

“Vans” was arrested by joint operatives of Benguet PPO, RID-PROCOR and PDEA-CAR after she sold to an operative acting as poseur buyer six (6) heat-sealed transparent plastic sachets containing suspected “shabu” with an estimated total weight of 2.44 grams having a Standard Drug Price (SDP) amounting to PHP 16, 592.00.

During the course of her arrest, recovered from her possession were the buy bust money and cellular phone used in the transaction.

Markings and inventory of the pieces of evidence were conducted onsite in the presence of the suspect and witnessed by Kagawad Bruno Shadto Jr of Barangay Poblacion, La Trinidad, Benguet and Prosecutor Olivia Oliva.

The arrested suspect and the confiscated pieces of evidence were brought to the custody of La Trinidad MPS for documentation while a case for violation of RA 9165 or the Comprehensive Dangerous Drugs Act of 2002 is being prepared against her. (PROCOR-PIO)