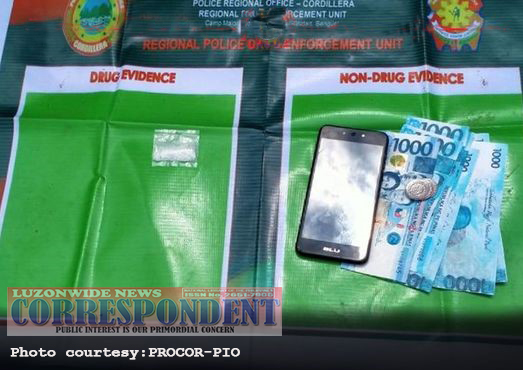 A Laborer listed in the Regional Top Ten Illegal Drug Personality (RTTIDP) and High Vale Individual (HVI), was arrested in a buy-bust operation conducted in the morning of September 20, 2021 in Caponga, Tublay, Benguet.

According to reports submitted to the Regional Director, PBGEN RONALD OLIVER LEE, disclosed that joint operatives of RID/RSOG COR together with Benguet PPO, RIU-14, RECU COR and PDEG SOU-14, launched a buy-bust that resulted in the arrest of Herman Benito Molitas, 46, a resident of Kibungan, Benguet.

The confiscated pieces of evidence were marked and inventoried on-site in the presence of Prosecutor Hazen Binayan; Punong Barangay Alnorwin Suaking of Caponga, Tublay, Benguet and a Media representative, Dionisio Dennis.

Molitas together with the seized pieces of evidence were brought at Tublay MPS for documentation and proper disposition, while a case for violation of RA 9165 or the Comprehensive Dangerous Drug Act of 2002 is being prepared for filing againts him.
(PROCOR-PIO)