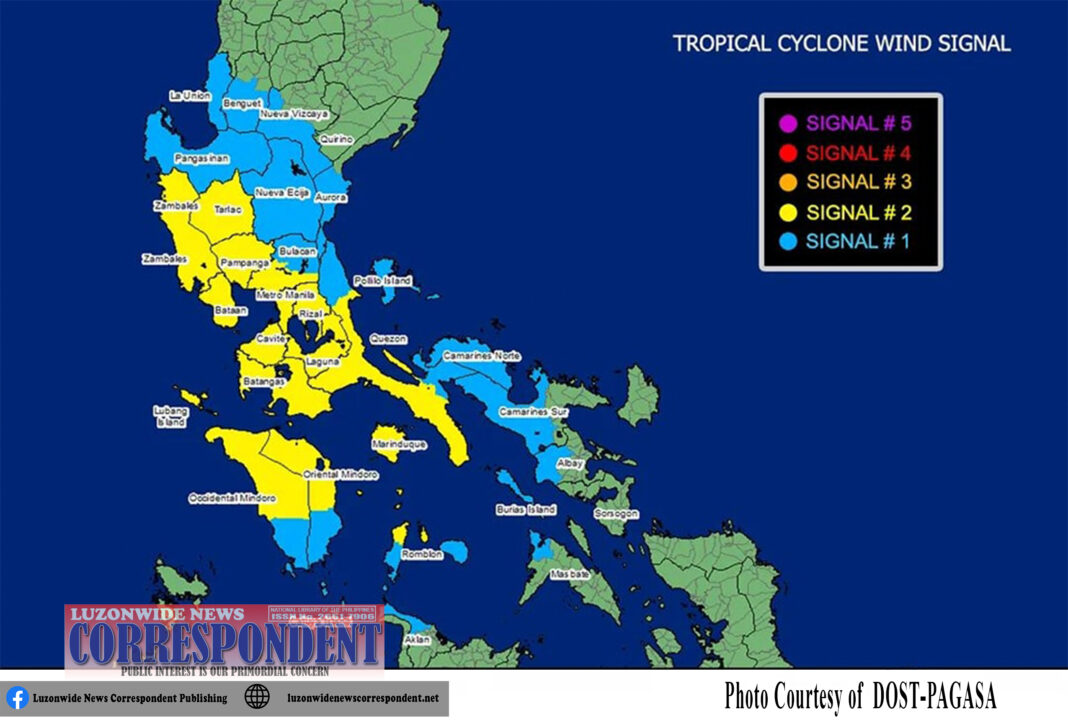 Location of Center (4:00 AM)The center of Severe Tropical Storm “JOLINA” was estimated based on all available data over the coastal waters of Boac, Marinduque (13.5°N, 121.7°E)

Intensity
Maximum sustained winds of 100 km/h near the center, gustiness of up to 150 km/h, and central pressure of 996 hPa

HAZARDS AFFECTING LAND AREAS
Heavy Rainfall
• In the next 24 hours, heavy to intense with at times torrential rains will be experienced over Metro Manila, Romblon, Marinduque, Cavite, Laguna, Batangas, Rizal, Quezon, Camarines Provinces, and Mindoro Provinces. Moderate to heavy with at times intense rains are also likely over Aurora, Bataan, Bulacan, Nueva Ecija, Pampanga, Tarlac, Zambales, Albay, Sorsogon, northern Palawan, Aklan, Antique, Capiz, Iloilo, and Guimaras.
• Under these conditions, scattered to widespread flooding (including flash floods) and rain-induced landslides are highly likely especially in areas that are highly or very highly susceptible to these hazard as identified in hazard maps.Severe Winds
• Damaging gale-force to storm-force winds are likely to occur within any of the areas where TCWS #2 is in effect. This may bring generally light to moderate damage to structures and vegetation.
• Strong winds (strong breeze to near gale conditions) with occasional gusts will be experienced in areas where Tropical Cyclone Wind Signal (TCWS) #1 is in effect. This may result to up to very light damage to structures and vegetation.

Coastal Inundation
In the next 24 hours, storm surge of up to 1.5 m over several coastal areas of Quezon may result in coastal inundation which may pose threat to life and property. In addition, coastal areas of localities under TCWS, especially those at #2 may also experience coastal flooding due to hazardous surf conditions.

HAZARDS AFFECTING COASTAL WATERS
• In the next 24 hours, Severe Tropical Storm “JOLINA” will bring rough to very rough seas (2.5 to 5.0 m) over the seaboards of areas where TCWS #2 is in effect. Sea travel is risky for all types of seacrafts over these waters. Mariners without the proper experience should immediately seek safe harbor.
• Moderate to rough seas (1.2 to 2.8 m) will be experienced over the seaboards of areas where TCWS #1 is in effect and the remaining seaboards of Visayas. Mariners of small seacrafts are advised to take precautionary measures when venturing out to sea. Inexperienced mariners should avoid navigating in these conditions.TRACK AND INTENSITY OUTLOOK
• On the forecast track, “JOLINA” is forecast to move over the Tayabas Bay and make another landfall in the vicinity of eastern Batangas this morning. However, due to the recent southwestward trend in the shift of track forecasts, the possibility of landfall in the vicinity of northern Oriental Mindoro is not ruled out at this time. Afterwards, the storm will cross the Batangas-Cavite area before emerging over Manila Bay tonight. This will be followed by another landfall in the vicinity of Bataan Peninsula. Frictional effects during its traverse of mainland Luzon will weaken “JOLINA” down to tropical storm category.
• “JOLINA” is forecast to emerge over the West Philippine Sea on tomorrow morning. Re-intensification is forecast to occur beginning tomorrow afternoon as the tropical cyclone moves west northwestward over the West Philippine Sea towards the southern China-northern Vietnam area.
• This tropical cyclone is forecast to exit the Philippine Area of Responsibility on Friday morning.

Considering these developments, the public and disaster risk reduction and management offices concerned are advised to take all necessary measures to protect life and property. Persons living in areas identified to be highly or very highly susceptible to these hazards are advised to follow evacuation and other instructions from local officials. For heavy rainfall warnings, thunderstorm/rainfall advisories, and other severe weather information specific to your area, please monitor products issued by your local PAGASA Regional Services Division.